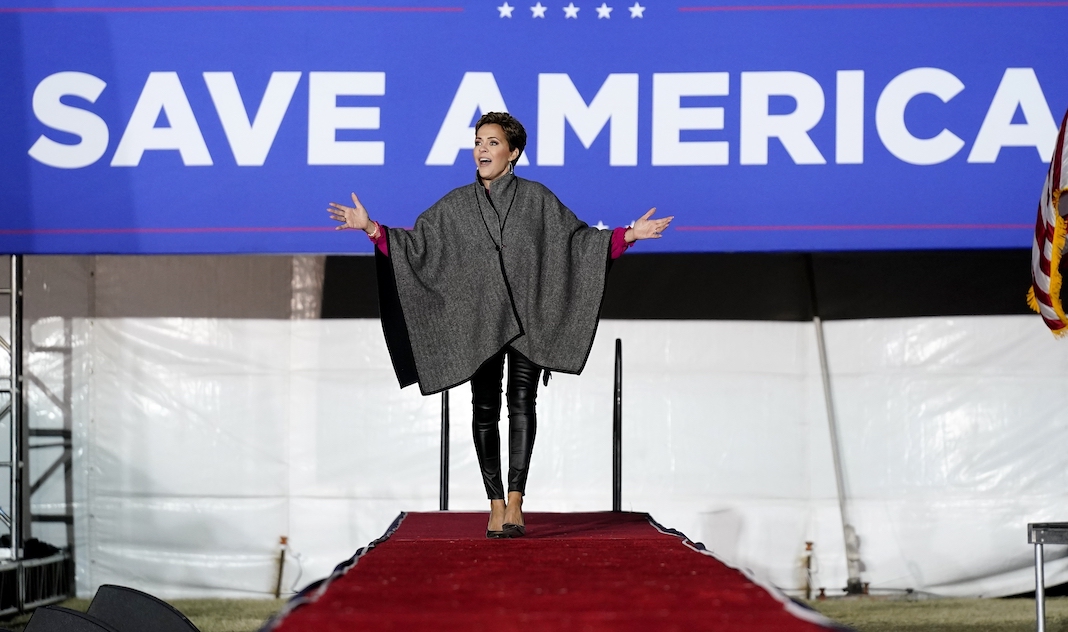 Kari Lake tweeted in December, ‘When I’m Governor, we’ll finish the wall ourselves in defiance of them. Is Joe Biden going to send officials in to arrest a sitting Governor? Try me.’

Kari Lake, a former news anchor for Phoenix Fox affiliate KSAZ-TV who is now the front-runner in the Republican primary race for Arizona governor, has promised to complete former President Donald Trump’s wall on the U.S.-Mexico border by illegally building on federal land.

On Feb. 4, Lake shared video on Twitter of comments she made on right-wing journalist Tim Pool’s “Timcast” podcast on Dec. 3 and tweeted, “The Feds have ABANDONED us. When I’m Governor, we’ll finish the wall ourselves in defiance of them. Is Joe Biden going to send officials in to arrest a sitting Governor? Try me.”

On the show, Lake had said, “We need to build the wall — first of all, we need to sue the federal government for failing to protect us, and while that lawsuit is working its way through the system, let’s go down and start building the wall. We have many miles of Arizona state land we could be building it on, and let’s finish these little gaps. They’re coming through a funnel, where there’s a gap in the president’s wall. And it is on federal land, but let’s build the wall anyway — what’s Joe Biden going to do? Arrest a sitting governor?”

In an interview with former Trump press secretary and Newsmax host Sean Spicer on Jan. 3, Lake announced a plan that she said she intended to give to current term-limited Arizona Republican Gov. Doug Ducey for dealing with the border, telling Spicer, “We have 18 to 20 miles, roughly, of President Trump’s wall to be built. We can do it, it may cost between $300 and $400 million. We have a $600 million surplus, so we have the money to do it.”

Later in the interview, Lake mentioned other border control policies she would implement as governor: She would issue a “declaration of invasion” at the border and create a multi-state task force to “take on securing the border,” including “taking people and detaining them if they’re here illegally and deporting them as well.” “I believe that this plan will solve our problem on the border and actually return our sovereignty to us,” Lake said. “We don’t have a border right now. The narco-terrorists are in control right now, Sean.”

Legal scholars agree that immigration enforcement is carried out by the federal government, not by the states.

In her immigration and border plan, “Defend Arizona: We Will Do What Washington Will Not,” Lake says that she will ask the Legislature to prioritize legislation that “Redefines the statutory definition of ‘abandoned federal property.’ Millions of dollars of border bollards are currently rusting in the dirt near Guadalupe Canyon. If Washington is intent to abandon equipment capable of protecting Arizonans to go unused inside our own state, we will make every effort to seize it and use it ourselves.”

“Any budget that fails to fully fund the border wall’s completion will be vetoed,” Lake says.

Republican lawmakers in Arizona, along with former Trump administration acting Homeland Security Deputy Secretary Ken Cuccinelli, called on Ducey in January to declare an invasion, which, they claim, would allow him to circumvent the U.S. Constitution’s prohibition against states waging war “unless actually invaded” and use the National Guard and law enforcement to counter the so-called “invasion.” Cuccinelli wrote in a “policy brief” published by the right-wing Center for Renewing America, “The reality is that if the federal government refuses to faithfully execute its own laws, then the states have no recourse but to interpose themselves between the federal government and the people they have sworn to protect in order to achieve deterrence and the removal of illegal aliens.”

Although polling in January showed she still leads the Republican field with 21% of registered voters, Lake, who was endorsed by Trump in September, has seen her lead over rival Matt Salmon, a former U.S. representative from Arizona, shrink from 17 points to 4 points.

While Lake raised $1.4 million in 2021, she is behind in the fundraising race. Primary opponent Karrin Taylor Robson, a developer and former member of the Arizona Board of Regents, has a $3.7 million war chest, about half of which Robson donated to her own campaign.

Arizona Secretary of State Katie Hobbs, the Democratic front-runner for her party’s nomination, raised $2.9 million in 2021.