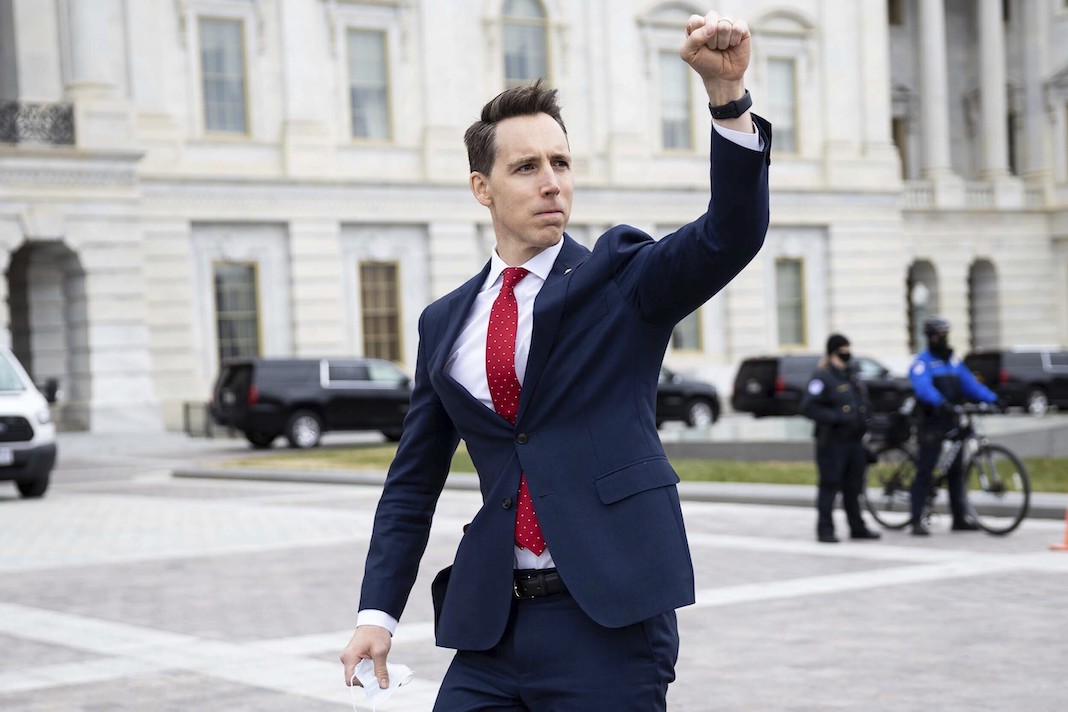 Hawley tweeted on Monday: “Proud to endorse @bgmasters for US Senate in AZ. Blake is principled, honest, and tough. He will take the fight to the woke left, Big Tech & Communist China. He will fight to secure the border & get tough on crime. He won’t just talk. He will lead. Can’t wait to serve w/ him.”

Masters quickly shared the tweet, responding, “Honored to be endorsed by Senator Hawley, who is simply outstanding. The Senate will be a very different place this time next year.”

Masters, a millionaire venture capitalist, is running on an anti-immigrant, anti-regulation, and anti-teachers platform. Masters’ campaign website emphasizes that he wants to “crack down on crime,” writing:

A society that permits mass lawlessness is doomed. We are on that path. Crime is through the roof, police are under attack across the country, and politicians and journalists dismiss deadly mob violence as “mostly peaceful protests.” Anyone who breaks the law should be arrested and tried and sentenced. It’s time to get serious, so that Americans can go about their lives knowing they’re safe and secure.

After President Joe Biden defeated former President Donald Trump in the 2020 elections, Hawley joined in efforts by Trump and other Republicans to lie about the integrity of the election and baselessly cast doubt on its results. Weeks after the election, at a GOP-led hearing on imaginary “irregularities,” Hawley demanded a full investigation based on the fact that many of his supporters didn’t believe the results.

On January 6, 2021 — just before Hawley voted to reject the Electoral College certification — a group of Trump supporters who believed these false claims marched to the U.S. Capitol, illegally entered the building and launched a violent and deadly insurrection.

The violent mob was egged on by Hawley, who was photographed giving them a supportive fist pump and thumbs-up as they moved toward the Capitol. Faced with widespread criticism and calls to resign, he told the Washington Post in May 2021 that he had no regrets and that the protesters were mostly peaceful.

“I don’t know which of those protesters, if any of them, those demonstrators, participated in the criminal riot,” he told the outlet. “And I think it’s a slur on the thousands and thousands, tens of thousands of people who came to the Capitol that day to demonstrate peacefully to lump them in with the criminal rioters and say, ‘Oh, you’re all basically the same.'”

Hawley opposed an ethics investigation into his role as something that would just “further divide the country.” His Senate campaign even sold coffee mugs commemorating his infamous fist pump.

Masters is best known for being a former business partner of billionaire PayPal co-founder Peter Thiel and co-author with Thiel of the book “Zero to One: Notes on Startups, or How to Build the Future.”

Thiel, who has come under fire for his various ties to racists and white supremacists, has already given at least $10 million to a super PAC supporting Masters and has been working to raise additional money for the race.

Masters too also dabbled in promoting Trump’s big lie about the 2020 election.

After telling CNN in July 2021 that “it’s really hard to know” whether Biden or Trump was the real winner, he falsely claimed in a November campaign ad, “I think Trump won in 2020.”

Jim Lamon, another Republican seeking the Senate nomination, fraudulently pretended to be one of the state’s members of the Electoral College and tried to cast a vote for Trump even though Biden won the state.

State Rep. Mark Finchem, a candidate for Arizona secretary of state, attended the Jan. 6, 2021, “Stop the Steal” rally in Washington, D.C. that immediately preceded the insurrection.

Masters and Lamon are two of a handful of announced GOP candidates hoping to take on Sen. Mark Kelly (D-AZ) this November.

The national party’s top recruit, Gov. Doug Ducey, announced in March that he would not run and did not want the job.

A Masters campaign spokesperson did not immediately respond to an inquiry for this story.